Empire has shared a new image from The Black Phone that highlights the creepy mask designed by Tom Savini and his team. 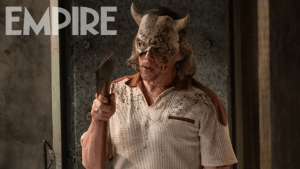 “Tom gave me a sketch he had done himself,” director Scott Derrickson (Sinister) told Empire. “As soon as I saw it, I was like, ‘Oh, well, this is what we’re doing.’ It was really amazing.”

The mask is worn by the Grabber (Ethan Hawke), a sadistic killer who traps children in his soundproof basement. When Finney Shaw (Mason Thames), a shy but clever 13-year-old boy, is abducted, a disconnected phone on the basement wall begins to ring, leading Finney to discover that he can hear the voices of the killer’s previous victims—and they’re dead set on making sure that what happened to them doesn’t happen to him.