New Tales From the Crypt Still Happening, Just Not Yet

It was being reported earlier this week that TNT’s upcoming revival of cult horror anthology series Tales From the Crypt was no longer happening. Happily, that’s not quite the case. To clear up the confusion, a TNT rep has made an announcement, confirming that although we may have to wait a while longer, the network is seemingly still working to get the series to us. Here’s what was said:
“The underlying rights to this classic, vintage property are complicated. TNT and others have been pursuing a solution for more than a year, with significant progress being made. We look forward to the potential for further active development of this valuable franchise once the clearance process is fully resolved.”

It was announced early this year that the iconic, pun-happy host The Crypt Keeper would not feature in the new series, with the character rights still belonging to HBO, who aired the original show from 1989-1996. The original planned airdate of October 2016 has come and gone, and we’ll no doubt not see the new Tales anytime imminently. 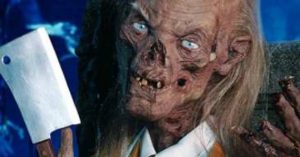 M. Night Shyamalan recently compared the show’s format – which will see stories taken directly from the original EC comics as well as new ones – to that of Charlie Brooker’s Black Mirror. TNT are presumably sticking to their plan to unleash Tales From the Crypt as part of a large horror block curated by Shyamalan that will also feature original shorts and two additional new shows, entitled Time of Death and Creatures. The last we heard, the event was scheduled for Autumn 2017.