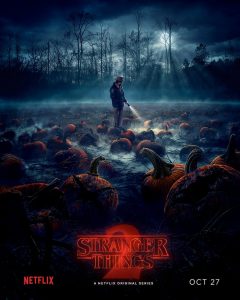 Over the weekend, Netflix put out a new poster for the hotly-anticipated second season of Stranger Things, and it couldn’t be more suited to the arrival of season 2, which lands just in time for Halloween. The artwork shows David Harbour’s police chief Jim Hopper taking a night time look around a spooky-lookin’ pumpkin patch. ‘Pumpkin Patch’ happens to be the title of the new series’ third episode.

Season 2 takes place almost a year after the events of the first. It’s Halloween in Hawkins, Indiana, and Will Byers has rejoined his friends after his trip to the Upside Down, although he’s not been left unscathed. While attempting to keep things stable for Will and his brother, Jonathan (Charlie Heaton), Joyce Byers (Winona Ryder), begins dating an old high school classmate, Bob, played by The Goonies’ Sean Astin. Astin is new to the show, as are Dacre Montgomery and Sadie Sink who play, respectively, brother and sister Billy and Max. While Billy struggles to make friends, Max becomes friends with the core group of boys.