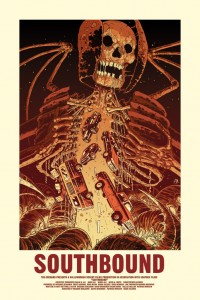 A new clip has been released from the upcoming anthology horror Southbound and it gives us a look at what director Roxanne Benjamin has in store for us in her segment ‘Siren’. The other directors involved with Southbound are David Bruckner, Patrick Horvath and Radio Silence.

Anthology films are always intriguing, because it’s uncertain what you’re going to get when you settle down to enjoy one. The opportunity to be greeted with equally great short films is rare, but films like Creepshow and Trick ‘r Treat prove that all segments can be as strong and unique as each other. Southbound has been very well-received so far, with many critics praising its abundant use of gore, as well as humour.

Synopsis:
On a desolate stretch of road, weary travellers — two men on the run from their past, a band on their way to the next gig, a man struggling to get home, a brother in search of his long-lost sister and a family on vacation — are forced to confront their worst fears and darkest secrets in these interwoven tales of terror and remorse on the open road.

Check out the clip below, it shows a group of young women stranded at the side of the road as they are approached by a couple driving by. Does anyone else get the feeling they’re making the wrong decision?

Southbound is available to buy on VOD in the USA now, so what are you waiting for?!