New The Shallows Clip Shows the Beginning of a Nightmare

As UK audiences eagerly await the August release of The Shallows (a wait made more agonising by the slew of positive reviews), a new clip has been released to keep us hungry.

The clip shows Blake Lively’s Nancy taking to the waves on her board, blissfully unaware as something great, white and decidedly dead-eyed lurks below the surface. 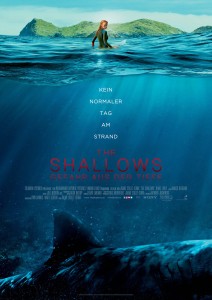 The suspense thriller is directed by Jaume Collet-Serra, who helmed 2005’s rather enjoyable House of Wax and 2009’s The Orphan, as well as Liam Neeson actioners Unknown and Non-Stop. He chatted with Scream for an interview about The Shallows, which you can read in the current issue of the mag.

The Shallows synopsis:
When Nancy (Blake Lively) is surfing on a secluded beach, she finds herself on the feeding ground of a great white shark. Though she is stranded only 200 yards from shore, survival proves to be the ultimate test of wills, requiring all of Nancy’s ingenuity, resourcefulness, and fortitude.

The Shallows swims into UK cinemas on August 12th.