NEW READY OR NOT FEATURETTE GETS BLOODY 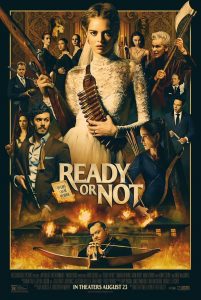 Fox Searchlight has released a new behind-the-scenes featurette for Ready or Not, shining a spotlight on the wedding dress worn by star Samara Weaving (The Babysitter, Mayhem). But this is one wedding dress that doesn’t stay white for long.

Directed by filmmaking collective Radio Silence (V/H/S, Southbound), Ready or Not follows a young bride (Weaving) who is forced to play a deadly game of hide and seek with the family of her new husband (Hannibal’s Mark O’Brien). As the film descends into a vicious fight for survival, the bride’s beautiful dress gets progressively more torn, bloody, and disgusting.

“The dress is a metaphor,” co-director Matt Bettinelli-Olpin explains in the video. “This movie starts grand and classical and then it just degrades and degrades.”

Watch the full featurette below, and catch Ready or Not in theatres from August 21st.