New Psychopaths Poster is all Pink and Blue

The line-up for 2017’s Horror Channel FrightFest was recently unveiled and you may remember that Mickey Keating’s (Darling, Carnage Park) latest endeavour Psychopaths was on the list. Now, we have a new poster to share with you and it’s all pink and blue with its beautiful retro design. Check it out below. 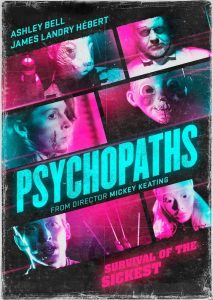 In an interview with Collider, Keating described the film as a “Kind of sprawling ensemble serial killer movie that’s very heavy-handed 70s, Paul Schrader-type violence […] It’s the exact opposite of what Carnage Park is, it’s very colourful and energetic and crazy. There’s 20 characters in the movie so it’s very different.”

Each one of Keating’s films have been very different; from the sci-fi Pod to the black-and-white psychological thriller Darling, so he’s definitely one of the most unpredictable film-makers working today. His unpredictability is his main appeal, because even if you’re not a fan of Darling’s slow-burn and symbolic tone, you’ll probably find a lot to love in the subtly violent Carnage Park or his mysterious debut Ultra Violence.

Synopsis:
The paths of multiple serial killers cross over one single, blood soaked night. Which psychopath will survive through to morning? Follow the soul of a recently executed serial killer as he descends back to earth and possesses his many followers beneath the full moon.

There’s Alice, an escaped mental patient who thinks she’s living in the 1950s glamour world, Blondie, a beautiful seductress who lures men down into her suburban basement, the Midnight Strangler, first seen claiming a victim in a seedy hotel, and an enigmatic masked contract killer who stalks the city with his own deadly agenda.