A new poster has been released for Thoroughbreds from writer-director Cory Finley and it boasts Good Breeding Gone Bad. The film follows an unlikely friendship between two teenage girls – played by Olivia Cooke (Bates Motel) and Anya Taylor-Joy (The Witch, Split) – who form a sinister plan to solve both their “problems”. 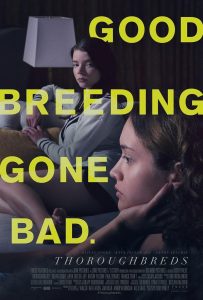 You’ll have to watch the exquisite red-band trailer below to see what their problems are. It looks packed full of dark fun and thrills, so it’s jumped right up our watch list.

We also have a couple of stills to show you which show another of the film’s stars, the late Anton Yelchin (Green Room) peering through a car window at Taylor-Joy. We wonder what his deal is.

Synopsis:
Two upper-class teenage girls in suburban Connecticut rekindle their unlikely friendship after years of growing apart. Together, they hatch a plan to solve both of their problems — no matter what the cost.

Thoroughbreds has already received rave reviews since screening at Sundance and Fantastic Fest, with it being praised as this generation’s Donnie Darko. It’s blend of pitch black humour and wit does look mighty appealing. 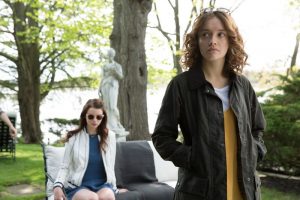 Thoroughbreds marks Finley’s directing debut and securing such a strong cast certainly seems like his first step is a strong one. Be sure to catch Thoroughbreds when it is released in the USA in 2018. It’s already received rave reviews since screening at Sundance and Fantastic Fest.