A New Poster for It Promises that We’ll Float, Too

It’s less than 2 months until one of our most anticipated horror films of 2017 hits the big screen and a new poster has been unveiled at SDCC. Check it out; it shows an ominous Pennywise in the background with his iconic red balloon, as the Loser’s Club take centre stage shrouded in a Stephen King-esque mist. 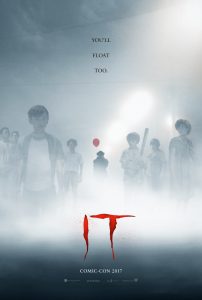 I’m nearing the end of the novel It – I’ve not seen the mini-series with Tim Curry – and I am extremely excited to see how Andy Muschietti brings the epic tale to life in a feature film. Unsurprisingly, the film will come in 2 parts, as the novel is over 1000 pages long. Muschietti has also shone some light on the sequel we could expect in 2019. He said:

“We’ll probably have a script for the second part in January. Ideally, we would start prep in March. Part one is only about the kids. Part two is about these characters 30 years later as adults, with flashbacks to 1989 when they were kids.”

This is not surprising; the novel blends the two time frames but this would be difficult for a film to capture. Flashbacks also make sense, as the idea of memory and remembrance is a key to the story. It all sounds so great so far and we’re also excited to see Bill Skarsgard as Pennywise.