Stephen King took to Twitter to showcase the new poster for the upcoming Gerald’s Game. Premiering later this month, Gerald’s Game will be directed by Mike Flanagan (Oculus, Ouija: Origin of Evil) and follows a woman in quite the sticky situation. The poster shows her tied to the bed as her husband lies draped upon her. 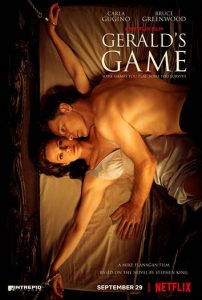 After accidentally killing her husband while handcuffed to a bed, Jessie (Carla Gugino) sinks into insanity as the voices in her head start becoming terrifyingly real. You can check out the trailer for the film below, which shows Jessie Burlingame slowly starting to lose her grip on reality.

In his tweet Stephen King said, “Horrifying, hypnotic, terrific. It’s gonna freak you out”. We do hope so! Be sure to check out Gerald’s Game when it hits Netflix on 29th September.