New Poster for Wes Craven’s The Girl in the Photographs

A new poster has been revealed for one of Wes Craven’s final films, The Girl In The Photographs. Much like the film’s concept, it shows the dark side of photography. They say that the camera never lies and that’s the sinister possibility that Colleen must come to terms with when she is sent pictures of a serial killer’s victims. 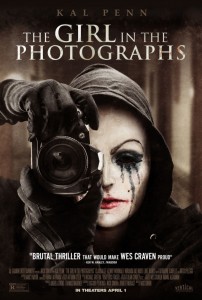 The late horror legend Wes Craven is an executive producer on The Girl In The Photographs and the film has been directed by Nick Simon who is the scribe behind The Pyramid and the director of 2010’s thriller Removal.

Synopsis:
Colleen is fed up with life working in a grocery shop and putting up with her abusive boyfriend. As she distances herself from her old life, she is tormented by two twisted serial killers who leave her photographs of their disfigured victims. Peter Hemmings, a hipster celebrity photographer, comes to her help in the form of a campaign ad, but her tormentors aren’t going to let her forget.

Check out the sinister poster and be sure to catch The Girl in the Photographs when it is released in the USA on 1st April 2016.