Not to be confused with the upcoming Saw spin-off of the same name, occult horror-thriller Spiral has got a new sales art poster ahead of the Cannes virtual market, and it teases something sinister is in town… 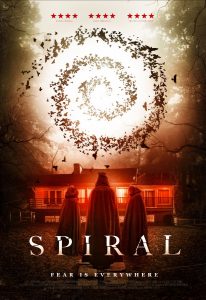 Directed by Kurtis David Harder (Incontrol), Spiral follows Malik and Aaron as they move to a small town with their teenage daughter, Kayla. But the town isn’t exactly welcoming to the same-sex couple—and as the homophobia grows progressively worse, Malik begins to suspect that even darker forces are at play.

We reviewed Spiral out of the Brooklyn Horror Film Festival last year, calling it an “uncomfortable and interesting watch” bolstered by nuanced performances. Keep your eye on this one!