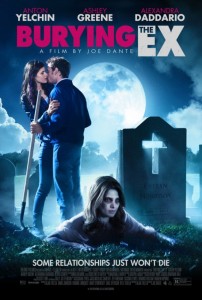 One of the greatest horror masters, Joe Dante, who created Gremlins, The Howling and The Hole, is putting his creative and dark mind to work with Burying The Ex. The latest poster for the comedy horror has just been released and proves to tell the tale that psycho ex’s really do haunt you for the rest of your living life.

Burying The Ex will be released by RLJ/Image Entertainment on June 19th 2015. 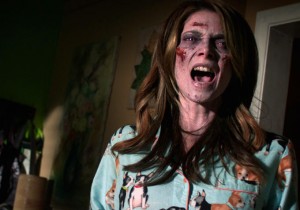 Synopsis:
Max believes he’s found the perfect woman in his incredibly beautiful, funny and all-round amazing girlfriend Evelyn. That is until they move in together and Max starts to realise how controlling, manipulative & down-right crazy she is, but being the sweet guy he is, he doesn’t have the courage to end things with her. Fortunately for Max, Evelyn is involved in a brutal car accident leaving her six feet under, and him a newly made bachelor. Max soon meets the real girl of his dreams and begins to realise he may have found his soul mate, but just as love starts blossoming, his ex rears her ugly head, and claws her way out of the grave and back into his life.