New Poster For Cooties Warns Us To Not Feed The Children 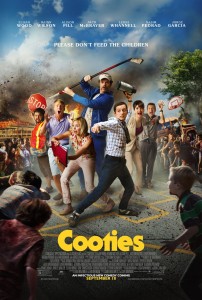 The latest poster for Leigh Whannell (Insidious) and Ian Brennan’s (Glee) comedy horror film Cooties has arrived in the school bus and it seems we need to be careful of feeding the children.

Elijah Wood (Maniac, Lord of the Rings) stars as an outcast teacher trying to make his way in the dangerous and territorial playground of elementary school, when one day the kids catch something nasty and turn into zombies.

Also starring in the childish carnage is funny man Rainn Wilson from The Office and Pineapple Express alongside Alison Pill from The Newsroom. Whannell and Brennan wrote the screenplay for the film whilst Jonathan Milott and Cary Murnion directed.  Elijah Wood will be producing alongside Daniel Noah, Josh C. Waller, Tove Christensen, Georgy Malkov and Steven Schneider.

Cooties is one of the debut releases from the new Lionsgate label, which is called Lionsgate Premiere and will be released in theatres and on demand on September 18th 2015.

Synopsis:
An elementary school is overcome by rabid toddlers after they consume a food virus that sends them drooling over flesh. The unconventional teachers build an incompetent army against the pupils plaguing the playground, but will they make it out when they can’t stop bickering over a pointless love triangle.