New Poster for Astron-6’s The Editor 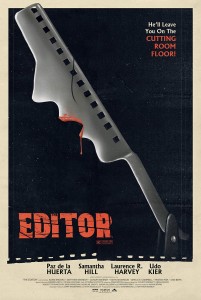 The giallo-inspired horror comedy The Editor has another giallo-inspired poster to go with it. It’s very retro and minimalist and comes from artist Gary Pullin, who has done some brilliant artwork for films including Evil Dead II, A Nightmare on Elm Street and Ghostbusters.

The Editor looks like a lot of bloody, surreal fun and stars Paz de le Huerta (I wonder how her lawsuit is going..), Udo Kier, Adam Brooks and Laurence R. Harvey. It has been directed by Astron-6’s Adam Brooks and Matthew Kennedy.

Synopsis:
Rey Ciso (Brooks) was once the greatest editor the world had ever seen. Since a horrific accident left him with four wooden fingers on his right hand, he’s had to resort to cutting pulp films and trash pictures. When the lead actors from the film he’s been editing turn up murdered at the studio, Rey is fingered as the number one suspect. The bodies continue to pile up in this absurdist giallo-thriller as Rey struggles to prove his innocence and learn the sinister truth lurking behind the scenes.

Take a look at the trailer below and immerse yourself in the madness. The Editor will be released in the USA on 8th September 2015. We are yet to hear of an official UK release date, but if you’re heading to the Extreme B-Movie Festival in Cambridge this year, you can catch The Editor on 20th August.