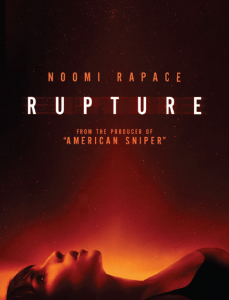 She may not be returning to Ridley Scott’s Alien world, but Noomi Rapace is definitely not saying goodbye to sci-fi just yet. Her next film is Rupture from director Steven Shainberg (Hit Me, Secretary) and follows a mother (Rapace) who is abducted by a mysterious organisation.

Synopsis:
Renee a single mum who lives with her twelve-year-old son Evan in a quiet suburban home, is terrified of spiders. Unbeknownst to both, their every move is being observed. While running her daily errands her car breaks down and she is violently kidnapped by a group of strangers.

About 24 hours later, in an anonymous laboratory, she is tied up and questioned about her medical history, including her great fear of spiders. Soon her captors explain to her that with her genetic abnormality can potentially allow her to RUPTURE in which her own alien nature can be released. Through the experience of one’s deepest fear (in Renee’s case spiders) causes this transforming her into her true self. 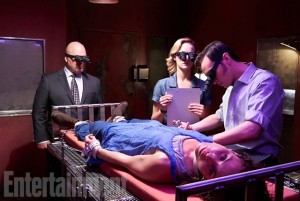 For anyone that is terrified of spiders this sounds like the ultimate nightmare! Fear not, there are no spiders in the imagery we are sharing with you. Phew. Check out the 2 images and a poster below which, oddly, boast the film coming from the producer of American Sniper. It also looks to have drawn a lot of inspiration from the Halle Berry-starrer TV series Extant…

Rupture has a release date slated for 2016.