NEW NOPE IMAGE LOOKS AT… SOMETHING

We’re getting closer and closer to the summer release of Jordan Peele’s new horror movie Nope. The latest image from the film, shared by ticketing company Fandango, sees Keke Palmer’s character staring at the window. 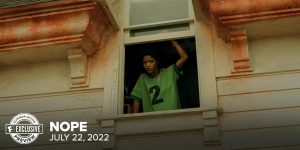 What is she looking at? We’ll have to wait until the film hits theatres on July 22nd to find out.

In Nope, the residents of a lonely gulch in inland California bear witness to an uncanny and chilly discovery. Starring alongside Palmer (Scream) are Daniel Kaluuya (Get Out), Steven Yeun (The Walking Dead), Michael Wincott (The Crow), Barbie Ferreira (Euphoria), and Brandon Perea (The OA).

Peele wrote and directed Nope, which marks his third feature film following the acclaimed Get Out and Us.