We’re being gradually drip-fed tid-bits of information regarding Darren Aronofsky’s upcoming mother!, which was announced at CinemaCon earlier this year and hits screens in just a few weeks. Earlier this month we saw the stunning trailer and this week has brought a new poster, which pays tribute to the classic artwork from Roman Polanski’s horror classic, Rosemary’s Baby. Intrigue continues to build. 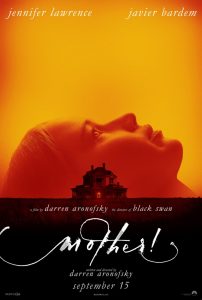 Aronofsky wrote, produced and directed mother! more or less in secret, with the following synopsis raising more questions than it gave answers:
“A couple’s relationship is tested when uninvited guests arrive at their home, disrupting their tranquil existence.”

mother! lands in cinemas on September 15th, having been brought forward from its original October release date.