If you feel like there has not been enough B-movie creature features and you’re sick of sharks in tornadoes, fishy snakes and fiery spiders, then let us introduce you to the next chaos-causing monster: the Terrordactyl. Personally, we thought Jurassic World was a bit short on pterodactyls, so we’re happy to see that they are, at least, getting some kind of screen time here. 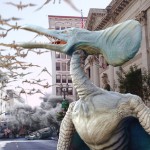 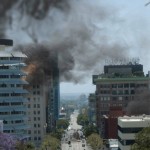 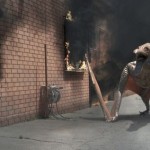 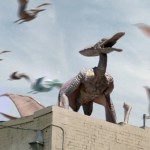 Synopsis courtesy of Movieweb:
When a meteor shower rains down outside Los Angeles, Lars (Christopher John Jennings) and Jonas (Jason Tobias), two friends stuck in tired, boring lives, head out to find one and strike it rich. After recovering one, they start being stalked by Terrordactyls, ancient flying reptiles, that launch a full-on assault on the city. They go on the run, trying to survive, where the unlikely heroes, along with Candice (Candice Nunes), a tough-and-sexy bartender, Valerie (Bianca Haase), her sultry room-mate, and Sampson (Jack E. Curenton), a constantly drunk and sassy ex-Marine, soon discover that there’s more to the meteor than meets the eye. They must learn to put their differences aside and fight back to make the Terrordactyls extinct once again.

The images are filled with cheesy goodness and they aren’t short on the flying prehistoric birds causing general mayhem in the streets of America. We love it when unlikely heroes must become just that and if you throw in a load of extinct creatures too, perfect!

Terrordactyl comes from directors Don Bitters III and George Reisner, There isn’t an exact release date yet, but it’s slated for 2016 so keep your eyes peeled.