New Image Lands of Frank Grillo in Beyond Skyline

Remember Skyline? The painfully mediocre alien invasion film from 2010? Yeah, us neither. Either way, the first image has been unveiled for the sequel Beyond Skyline and it shows Frank Grillo (The Purge: Anarchy, Demonic) looking a bit terrified. 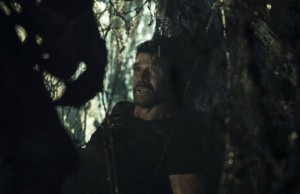 Whereas the first film showed a large scale alien invasion, Beyond Skyline looks ahead of this and focuses on one man (Grillo) as he fights to save his son from an alien warship. Scaling the film down sounds like a good idea, because Skyline did pale in comparison to some of the big-budget alien invasion films like Independence Day. With Independence Day: Resurgence set to release this year too, which extra-terrestrial film sequel will come out on top? We think we can call this one.

Beyond Skyline has a release date tipped for 2016 and comes from director Liam O’Donnell – who wrote the story for Skyline – and further stars Bojana Novakovich, Jonny Weston, Iko Uwais and Callan Mulvey.