A brand new image has been released for St. Agatha, the latest horror flick from director Darren Lynn Bousman (pictured above). Bousman’s last genre effort was the impressive, but flawed, supernatural shocker Abattoir that is definitely worth a watch. I’m excited to see St. Agatha, which sounds like it’s going to be another creepy effort from the director. 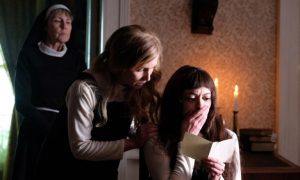 Synopsis:
Set in the 1950s in small-town Georgia, the film centres on a pregnant con woman named Agatha who is on the run and seeks refuge in a convent. What first starts out as the perfect place to have a child turns into a dark layer where silence is forced, ghastly secrets are masked, and every bit of willpower Agatha has is tested as she learns the sick and twisted truth of the convent and the odd people that lurk inside its halls.”

Darren Lynn Bousman has also directed Saw II-IV and the remake of Mother’s Day; the latter being a bit of a dud.

St. Agatha will arrive later this year to revive the lacking genre of nunsploitation.