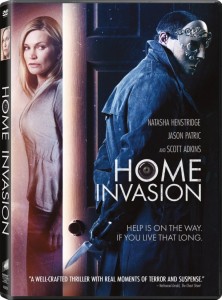 The title of Home Invasion is definitely as on-the-nose as they come, but don’t let that impact your expectations for the film, as the trailer actually looks quite good. Appearing like a mish-mash of films such as Them and Panic Room, it shows a mother and her son become victims to a gang of masked intruders. In a similar fashion to the Halle Berry-starrer The Call, the mother is kept on the phone to a security system specialist who promises to get the family to safety.

Synopsis:
When a wealthy woman and her stepson are targeted by a trio of expert thieves in their remote mansion, her only form of help comes from a call with a security systems specialist. But as the intruders become increasingly hostile and the connection wavers, will she trust him to be her eyes and navigate her to safety?

It may hit all the expected notes of a home invasion film, but it does so in a slick and exciting fashion. Home Invasion stars Natasha Henstridge, Jason Patric and Scott Adkins and will be released on 1st February 2016.