I AM THE NEW GOD: Book Review

This is a DarkFuse novella by Nicole Cushing, who found acclaim with her prior book, Children of No One. I haven’t read it yet, but do have it on my shelf. I Am The New God is about a college student, Greg Bryce, who out of the blue begins to receive letters from a person known as the hierophant. These letters state that Greg is the titular new god and that he will replace the current Christian God. After receiving a few of these letters, as a distraction from an uncomfortable college life, he writes back and engages the hierophant.

Greg is homophobic, refers to his disabled little brother as retarded, and is all-around unlikable so he doesn’t garner much sympathy. Then again, the author doesn’t really ask for any on his behalf. Cushing does a nice job conveying Greg’s feelings of being an outsider and being different, although having pretty girls laughing at him on the beach is a little cliché. Greg seems to go from mild amusement at receiving the letters to buying fully into the idea that he is a god in the blink of an eye. Watching him go from curious to screaming at God, completely mad, and planning to vanquish him is a bit hard to swallow. We learn he has Christian fundamentalist parents so rejecting them and what they stand for might help to explain Greg’s behaviour, but it still didn’t seem to be a natural progression. There are questions over Greg’s history of mental illness and medication. It seems that going off his meds is the bridge to his acceptance of the idea that he is becoming a god. It’s not explicit. The potential of using mental illness as a reason for his belief, and then casting the mentally ill in such a negative light, almost as a symptom of evil, doesn’t sit well with me. I might be looking too much into it, but it’s an uncomfortable idea, and although events further in the book provide more explanation, it still felt like a cold plot device. 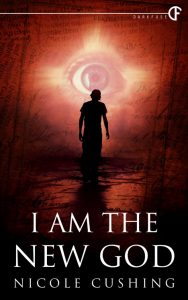 The hierophant is a far more interesting character, a defrocked minister, who believed he was given the divine task of assisting the new god after talking with a vision of John the Baptist. It would have been good to have more of the focus on him and his backstory. He is more sympathetic than Greg, selfless to Greg’s selfishness. The hierophant has to give the new god seven tasks one at a time that must be completed before he becomes a deity. The first of these is to create a life. It was fascinating seeing his creation, the amusing Hop-frog, sentient in his eyes, interacting with the normal world. In fact, Greg’s discussions of reality were the most imaginative and captivating parts of the book. The destruction of the Hop-frog brought some quite unexpected and graphic violence to the transgressor, his college roommate, Japanese exchange student Arihiro, who becomes his first unwilling disciple. This set Greg’s descent or rather “ascent,” for the rest of the book.

The novella has a very strong conclusion, and the story takes a turn which I really enjoyed. Overall I Am the New God is an unusual but captivating novella. Providing a fresh storyline that keeps away from the traditional, expected tropes of the genre is refreshing. It’s definitely worth a read.