NEW CLIP: WITCHES IN THE WOODS

As the temperate plummets, the fear rises in this chilling new clip from Witches in the Woods. 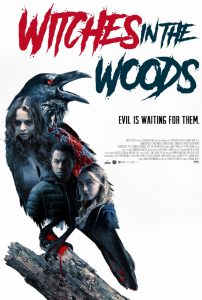 Directed by Jordan Barker (Torment), Witches in the Woods follows a tenacious college freshman who ditches the books to go on an off-the-grid snowboarding trip with her friends. Unfortunately, a road closure forces them onto an unmarked route through a dark New England forest where, centuries ago, a dozen women were hanged for witchcraft. After the car slams into a ditch, the group is left lost and freezing in the woods. And as hypothermia sets in and violent hallucinations threaten their sanity, the group dynamic begins to crumble… and the witch hunt begins.

Witches in the Woods is now available On Demand via Shout! Studios. Get a sneak peek of the film below.