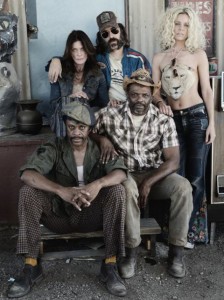 The images for Rob Zombie’s up and coming clown massacre movie have been flooding in as he teases us like the face-painted freaks will in 31. We’ve already seen how threatening and creepy the bloodthirsty villains will be, and now we meet the supposedly good carnies that will be pawns in the gory game.

Rob Zombie is obviously his wife’s biggest fan, which means we get to have another look at Sheri Moon Zombie as a yet to be announced character. All we know is she could potentially be one of the carnival workers, but whether she’ll actually be considered a good guy is questionable after her previous roles.

Also starring in 31 will be Judy Geeson as Sister Dragon; Jane Carr as Sister Serpent; Richard Brake as Doom-Head; Ginger Lynn as Cherry Bomb; David Ury as Schizo-Head; Daniel Roebuck as Pastor Victor; Pancho Moler as Sich-Head; Tracy Walter as Lucky Leo; Elizabeth Daily as Sex-Head and Torsten Voges as Death-Head. Malcolm McDowell will star as Father Murder, the owner of the sick Murder World. Panda Thomas will be the manager of the traveling road show only known as The Venus Lux Happy Time Fun Show.