The sequel to the 2018 film Venom, Venom: Let There Be Carnage is slated for release in June of 2021—but comic book fans won’t have to wait that long to get a bite of Cletus Kasady, aka Carnage! The super-villain is returning to print for a brand new miniseries in the form of Carnage: Black, White & Blood, the first issue of which will debut in March! 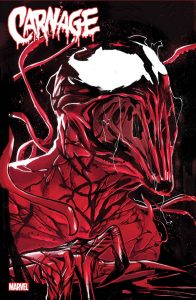 The tales in Carnage: Black, White & Blood are described as “spine-chilling” and “not for the faint of heart.” Take a peek at the first issue’s cover (designed by Pichelli), as revealed by CBR.