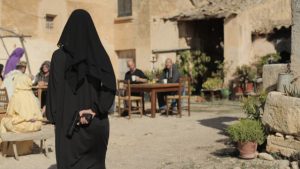 Lisa (Angela Dixon) is a woman on the edge. Still recovering from having lost a child a few years previously, she is now adjusting to having a new baby in her life, whilst conducting a strained affair with its father (Nigel Whitmey) – a married man with high political ambitions. Persuaded by her mother to get away from it all for the good of her health, Lisa takes her baby daughter to the north coast of Africa on holiday. However, one morning whilst on the beach her attention is momentarily distracted, during which brief time her baby is abducted. Alone in a foreign country and with no one to help her, it is up to Lisa to hold herself together as she pushes herself to the edge – both physically and mentally – in a desperate search for her daughter, before the baby is lost forever in the illegal market for stolen children in Africa and the Middle East. 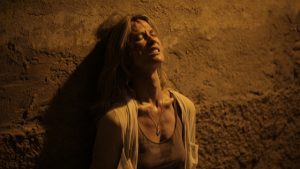 If ever a film proved that real, tangible horror doesn’t require guts, gore and oceans of blood, Never Let Go, the thriller by British writer / director Howard J. Ford – which showed to great acclaim at last year’s London FrightFest – is just such a film. Probably best known previously for the zombie flick The Dead, and its Indian based sequel The Dead 2: India, this time round Ford focuses on real life, and an event which will ring true to many people in our modern world – child abduction.

This film really belongs to Dixon, as Lisa the distraught woman at the centre of the story. That she is virtually a one woman army, who manages to take on and destroy anyone and anything which stands in her way, as she chases through the backstreets of a hot and dusty Marrakech and then out into the desert no man’s land beyond, may at times stretch credibility. However who is to say what lengths a person can be pushed to if they are fighting for the most important thing in their lives? As such Dixon gives a mesmerising performance, totally believable as the distraught mother taken to the edge of madness as he fights a hostile and foreign environment to find her missing child. Add to this the betrayal by those she thought were on her sides and you can begin to feel something of the real-life horror of the situation in which she finds herself. The setting of the action – the film was shot on location in Marrakech with it’s myriad of twisted streets, hidden courtyards and bustling shopping bazaars – simply adds to Lisa’s sense of confusion and isolation as well as the film’s frantic pace.

There are of course a few anomalies, which weaken slightly what is otherwise a beautifully taut and edgy ninety odd minute adrenaline rush – nothing is perfect after all. Odd things like why a single mother would want to take her new baby, on her own, to holiday on the north coast of one of the world’s most dangerous and volatile continents. Given the turmoil that this region of the world is in at the moment, it does beg the question as to why a woman would decide on this area as a holiday location –  particularly given Lisa’s background (which is hinted at throughout the story), her fragile state of mind and the fact that she is American.  Wouldn’t a tour of the English Lakes or a European city be 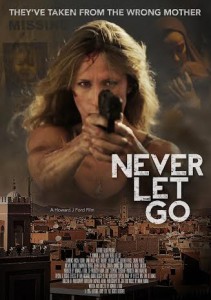 more hospitable? And why is no one, anywhere, willing to help or believe her, with everyone, almost without exception, believing her to be in the wrong. Still there wouldn’t have been a story if things had worked out smoothly, and what you get as a result of the various twists and turns, as well as some of the more unbelievable plot points, is a race against time once the action kicks in and Lisa’s baby is stolen. The addition of another abduction – which opens the film – and a clever subplot which takes place back in Lisa’s homeland of America, involving her married politician boyfriend and father of her child, makes sure that the action never gets the chance to lag.

Made all the more chilling through its real-life setting and authenticity, Never Let Go results in a trip which is just as unsettling as any conventional, run-of-the-mill horror film.