NETFLIX’S THE BABYSITTER GETTING A SEQUEL 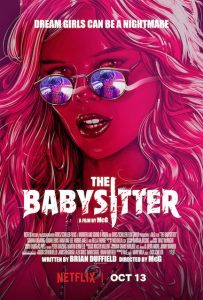 Netflix has ordered a sequel to its lukewarm horror-comedy The Babysitter, and McG is returning to direct.

In the first film, a loney, 12-year-old boy named Cole (Judah Lewis) falls in love with his babysitter Bee (Samara Weaving). Unfortunately, after staying up past his bedtime one night, Cole discovers that Bee is part of a satanic cult.

It’s unclear whether The Babysitter 2 will be a continuation of this story. Dan Lagana (who wrote and produced Netflix’s American Vandal) will be penning the film, which is expected to begin shooting this October. Casting is currently underway.