It was reported way back in 2014 that Mike Flanagan was keen to direct an adaptation of Stephen King’s novel Gerald’s Game, but all went a bit quiet soon after. When speaking in a recent interview with Rue Morgue, Flanagan offered a slight update on Gerald’s game, citing Netflix as a possible platform for his adaptation. 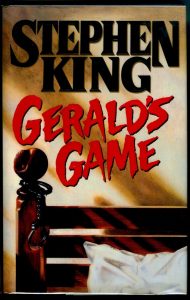 “Netflix, because of how well Hush has done, said, ‘We’re really interested in this, and we’d like to do it the way you want to do it.’” Flanagan said. Hush was fantastic, so it’s great that it’s had the success that it deserves and given Netflix faith in Flanagan’s future work.

When speaking about why it’s take so long to get a Gerald’s Game adaptation off the ground, Flanagan offered, “It’s a real challenge for financiers and distributors, who say, ‘Yeah, we love your work, we love Stephen King, but this story, this particular story? We don’t know how it works,’ without reshaping it to fit a much more conventional structure, which I did not want to do.

The story follows a woman who kills her husband when she is tied to a bed, causing her to let the voices in her head take over when her chance for escape begins to decrease. It will be a challenging story to bring to the big screen, but Netflix should allow Flanagan to have creative freedom; adapting it how he wishes and reaching as wide an audience as possible while he does it.