Netflix has canceled its original series Daybreak after just one season. 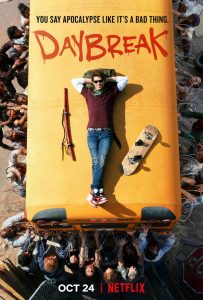 Series co-creator Aron Coleite broke the news to fans on Twitter, sharing a prepared statement that read in part: “We learned last week that Daybreak will not be returning for a second season. We’re so sorry we couldn’t share it with you sooner but also so grateful that we got to hang out in these last few live tweet sessions with you all. Thank you for picking up what we put down, for running with it in all of your amazing, weird, monstrous ways and for being such an important part of this show and our experience making it.”

Set in Glendale, California, Daybreak saw an eclectic group of survivors trying to navigate the strange and dangerous world they found themselves in following a nuclear blast. The cast included Colin Ford, Matthew Broderick, and Krysta Rodriquez.

“No one is as heartbroken as we are that we can’t share more of this ride with you,” Coleite wrote. “But we’re so grateful to have gotten to bring it this far.”