NETFLIX ADAPTING NO ONE GETS OUT ALIVE 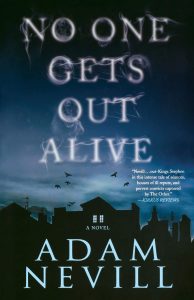 Writer Adam Nevill’s 2011 horror novel The Ritual was adapted into a feature film in 2017, and now his 2014 novel No One Gets Out Alive is getting the same treatment! A film adaptation is currently in the works from Netflix and Imaginarium Productions, with Santiago Menghini directing.

No One Gets Out Alive follows an immigrant in search of the American Dream. But after being forced to take a room in a boarding house, she finds herself trapped in a nightmare she can’t escape…

Christina Rodlo (The Terror: Infamy) and Marc Menchaca (The Outsider) will star in the adaptation, which was penned by Jon Croker and Fernanda Coppel. Andy Serkis, David Bruckner, Phil Robertson, and Adam Nevill will serve as executive producers, with Jonathan Cavendish and Will Tennant producing for Imaginarium.