Synopsis:
Sixteen year old Jesse (Elle Fanning) travels to Los Angeles with dreams of becoming a fashion model but, while rising through the industry, the doe eyed starlet discovers the City of Angels to be a shimmering facade with evil festering beneath its surface. 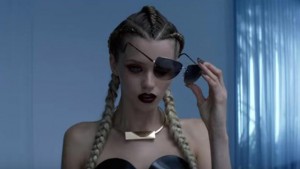 Many people probably have a secret desire to see Hollywood burn (figuratively of course/ on the silver screen) and what better a director to orchestrate such a ghastly aspiration than Nicolas Winding Refn. The Danish film-maker’s previous two features (Drive and Only God Forgives) elevated him to the level of auteur within the cult film arena, to the point where he could be considered on the cusp of becoming A-list, in terms of how widely he is revered. Even though Refn’s style may be too idiosyncratic to ever permeate the mainstream, it still remains inimitable.

At a push, the great Dane could probably slip into a franchise should the need arise or price be right (the man made Ryan Gosling a star after all) but while Refn may seem like the last film-maker to embrace the Hollywood machine, he is clearly the type to pass judgement on it. Refn’s latest, The Neon Demon, doesn’t depict a literal collapse of the star system but is a scalpel sharp study of a fashion landscape in a vacuous, chic yet haunted LA where physical beauty is capital and literally only skin deep. While Hollywood fails to burn unerringly, the manner in which Refn dissects its trade (with knives out) and characters’ lust for eminence, makes The Neon Demon seem like the great Dane condemning the fashion world to hell. Meanwhile, the question: “who is the Neon Demon?” remains pertinent throughout. 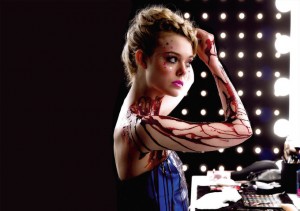 Elle Fanning’s credulous Jesse is the doe-eyed protagonist/ fairy tale princess/ wannabe model and personification of untainted beauty. Jesse’s inner splendour is, ironically, in a sea of superficiality, at the heart of the film’s core, and its supporting characters’ desires. After being employed/ adopted by fashion VIP Jan (Christina Hendricks), Jesse is flaunted amongst the bigwigs but perceived by her peers as a bacterial threat, a cancer corrupting their blossoming careers. Jesse grows malignant with grace while rising through the raceless facelifts, terse fashion shoots, cracked sequins and jaded publicists while acts of sexual assault, necrophilia and cannibalism sputter beneath the industry’s facade.

Purity is targeted and feasted on by age-famished, surgically mangled aristocrats, salivating for youth. Jesse becomes brain-washed, consumed then exploited while adopting the characteristics of those around her and inadvertently loses her soul in the process. Surgically sharpened supermodels Gigi (Bella Heathcote) and Ruby (Jean Malone) strive to take her down while Jesse’s risible, rapey landlord Hank (Keanu Reeves’ best performance in years) skulks about the backdrop, riddled with complexes, ulterior motives and demanding cash she doesn’t have.

Refn’s juicy visuals gild this tale like a sequin giallo/ glove, as the director extrapolates a shadowy fluorescence from the nightlife and neo-gothic milieu. Characters glide through industrial/ electro, strobe-thudding night clubs soaked in sleazy neon while Refn interjects bizarre horror scenes and surprisingly subtle (yet effective) violence. Yet despite the striking visuals and another excellent score from composer Cliff Martinez (Drive and Only God Forgives), The Neon Demon is as cold, clinical and soulless as its characters. Maybe Refn intended the film to be this way (and with this in mind, maybe he is The Neon Demon): reflecting a built-to-wow world that’s cosmically hollow beneath its glittery veneer. 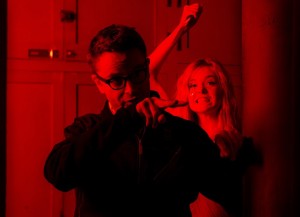 However, emotional substance is imperative, as The Neon Demon may be visually stunning but it has nothing to say about Hollywood that hasn’t been said before. Brian Yuzna’s gunky, surgical splat-fest Society addressed an obsession with youth, beauty, fame and cosmetic enhancement in a sun-soaked setting while David Lynch’s Mulholland Drive told a similar tale, about the starry eyed sentiments of an innocent woman struggling to find fame in a sea of evil/ surreal imagery, multiple metaphors and entwining subplots. David Cronenberg also touched on similar themes in his most recent feature, Maps to the Stars.

The Neon Demon never seems desiccated due to its enthralling imagery and systematic story structure. Refn’s pensive visuals conjure an alien landscape with a chic Vogue vibe which the director admits to being partly sci-fi. It’s impossible not to be dumbfounded by the imagery but more effort could have gone into crafting a stronger narrative to properly compliment the sublime visuals or by developing the protagonist to the point where the viewer can empathise with her. The violence is not as teeming as it is in Drive or Only God Forgives but scenes involving knives, an eyeball and vomit could trigger an involuntary gag reflex and will knot in minds long after the end credits roll. Like most of Refn’s work, this requires a re-visit, as there could be secreted meat on it’s bones, but on first impression, The Neon Demon lacks the heart and soul required for a truly rewarding experience.