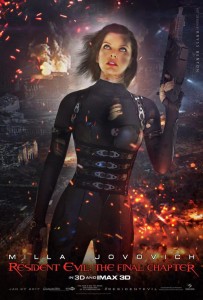 Footage shown at CinemaCon has revealed details surrounding the plot of next year’s Resident Evil: The Final Chapter. It was also confirmed at the event that the film’s title definitely means the final chapter in Alice’s (Milla Jovovich) story, though I guess Screen Gems and Capcom are keeping their options open with regards to telling further stories without her.

We already know that as well as Jovovich reprising her famous role, Ali Larter will return as Claire Redfield and Shawn Roberts as Albert Wesker. Joining them will be Ruby Rose as Abigail and William Levy as Christian. Paul W.S. Anderson directs, as he has with 3 of the previous 5 films in the series. The Final Chapter is due to hit cinemas on January 27th, 2017.

Now, onto that CinemaCon footage and a warning, for here be some mild spoilers.

As reported by Latino-Review, the screened footage included “…quick glimpses of zombies, monsters, explosions and gunfire. It also has new costume looks for Alice, Claire Redfield and Albert Wesker.” According to the site, the sixth film in the series will see Alice lead her group back to Raccoon City, where the T-virus originated.

The footage is also said to have hinted towards the introduction of a new virus with the potential to eradicate the T-virus. The new virus is airborne, and may be able to reverse the effects of the zombie apocalypse, which now threatens to wipe out humanity entirely.

Fighting the virus with another virus is a pretty cool direction to go in. The human race may yet see a happy ending.