Necronomicon Bound In Flesh Again In Ash Vs Evil Dead

Books aren’t generally seen as demonic objects not to be reckoned with, but that’s a different story in The Evil Dead films when one book awakens the deadite apocalypse. 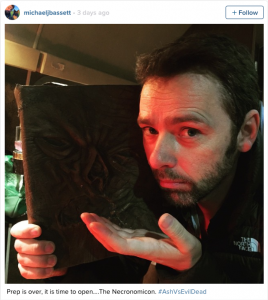 The Necronomicon is the iconic book that unleashes all hell upon Ash, and that hellish vision is returning in Ash vs Evil Dead. The latest image was posted on Instagram by director Michael J. Bassett and shows him holding an almost replica looking flesh and ink book.

The 10-episode follow up to the popular horror franchise is being executive produced by original director Sam Raimi, Rob Tapert and Bruce Campbell. Raimi will be sitting back in his old seat as he takes to the familiar reigns and directs the first episode.

Bruce Campbell will be reprising his beloved boom stick wielding, chainsaw loving character, Ash, who has spent the last 30 years trying to forget all the horrors that happened before. After all this time, the Deadite apocalypse is still raging and finally threatens to destroy society as a whole, forcing Ash to finally face his nightmares.

Also starring in the malicious rampage is Lucy Lawless (Salem) as Ruby who believes the evil is Ash’s fault, Ray Santiago (Touch) as Pablo who is Ash’s sidekick, Dana DeLorenzo (A Very Harold & Kumar 3D Christmas) as Kelly Maxwell an off the rails child outrunning her past and Jill Maire Jones (Sleepy Hollow) a state trooper set on sentencing Ash for murdering her partner.

Ash vs Evil Dead will premiere on STARZ in the fall of 2015.