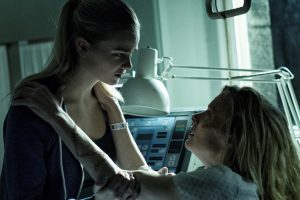 OK, so we’ve been covering this film quite a bit, but it looks ace, so you’ll be getting no apologies from us. Just days after the latest trailer landed for Dennis Bartok’s Nails, the Irish horror has been given a UK and Ireland release date, hitting cinemas on June 16th.

Bartok’s directorial debut, Nails stars Shauna Macdonald (The Descent, Howl) as Dana, a track coach who, “…having survived a near-death car accident, finds herself almost completely paralysed and trapped inside her own body. While recovering, she becomes convinced that some evil presence exists inside her hospital room and is intent on killing her.

No one believes her – not even her own family, who think she’s experienced a mental breakdown. However, Dana soon realises she may not be the only target. As the hauntings become more disturbing and violent Dana’s life is increasingly at risk – as well as the person she cares most about: her teenage daughter, Gemma.” 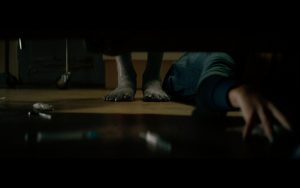 Leah McNamara (Cherry Tree) co-stars as Gemma, along with comedian/actor Ross Noble (Stitches) as Trevor Helms, a nurse’s aide at the hospital who slowly comes to believe Dana when no one else will.

With the release announcement comes this new handful of stills from the film.