The ‘Nados are Back in the Trailer for Sharknado 4

The fourth Sharknado movie is getting ready to awaken and to remind us that it is on its way – like we could forget – we have the first full-length trailer to share with you. It’s bigger, better and more catastrophic than ever, featuring oil-nados, fire-nados and the ‘nado to end them all… the COW-nado. That’s right, sharks aren’t the only creatures swirling up in a twisty wind this time. 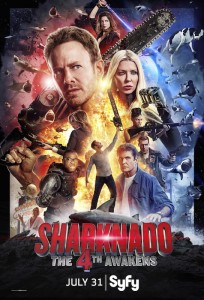 Five years after the East Coast was ravaged in “Sharknado 3: Oh Hell No!” Fin, his family and the cosmos have been blissfully sharknado-free in the intervening years, but now sharks – and ‘nados! – are being whipped up in places (and ways) least expected…

nadoThe Sharknado franchise isn’t exactly stunning cinema, but there is a lot of fun to be had if you’re willing to abandon all sense of reality, what you’d typically associate with being a great film and just go along for the bumpy ride. It also helps to get a little bit drunk.

Check out the mad trailer below and be sure to catch Sharknado 4: The Fourth Awakens when it airs on Syfy on 31st July. It stars Stacey Dash, Cynthia Bailey, Kym Johnson, Carrie Keagan, Gena Lee Nolin, Ian Ziering, Tara Reid and a ton more famous faces you’re sure to recognise, including David Hasselhoff. May the force be with us!