With their penchant for hideous masks and arresting live performances, the hard rock outfit Mushroomhead had been blurring the lines between horror and music since their inception in 1993. If there were any doubts these nu-metal practitioners are diehard horror fans themselves, the video for an alternative version of We Are the Truth will dispel all misconceptions.

While clearly adopting the unique aesthetic of Sam Raimi’s Evil Dead and Devil Dead 2, the inclusion of guest vocalist Jackie Laponza gives the new video for We Are the Truth more than just a hint of Fede Alvarez’s 2013 remake as well. Strap on your headphone and settle in for some sonic mayhem and wicked imagery!

The video will be included on Volume III, a Mushroomhead DVD release slated to drop on August 17th. The band is also about to headline the North American Summer of Screams tour along with fellow metal acts Powerman 5000, The Browning, Psychostick, and others. Check out dates and cities below. 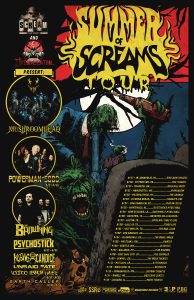