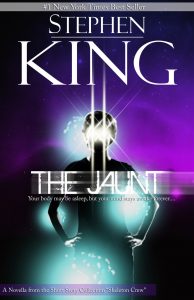 Following the box office success of It Chapters One and Two, it’s no surprise that Andy Muschietti is a hot commodity right now when it comes to Stephen King adaptations. He’s currently attached to an adaptation of Roadwork, which King published back in 1981 under his pseudonym Richard Bachman. But the director has also revealed that an adaptation of King’s short story The Jaunt is still in the works, which he was first attached to back in 2015.

The Jaunt was originally published in The Twilight Zone Magazine in 1981 before being collected in King’s 1985 anthology Skeleton Crew. Set in the 24th century, it centres around a form of teleportation that allows instantaneous travel across vast distances. Trouble is, you need to be unconscious to do. And if you’re not… Well, instantaneous can be longer than you think.

Are you excited to see Muschietti tackle more Stephen King stories? Let us know what you think!