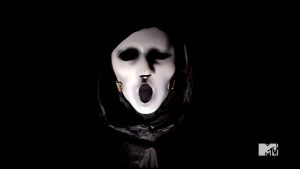 MTV recently announced that it would be heading in an entirely new direction with its third season of Scream, hoping to focus on a “less white story” by introducing more black characters and changing location. Details have been minimal so far, but now the new characters have started to take shape. You can get to know them by reading the announcement from TVLine below:

* First up is Dion, a Michael B. Jordan-esque football player on track to score a college scholarship — that is, until a masked killer uses Dion’s darkest secrets against him, turning his life upside down and making him question his own sanity.

* Liv is Dion’s cheerleader girlfriend, as beautiful as she is brilliant. She’s also down to lend a helping hand where needed, though her good intentions often land her in hot water.

* Kym is the rebellious one of the group, always willing to say what everyone else is thinking. She’s organized and protective, two qualities that will serve her well when a killer starts targeting her friends.

* Beth is a little different from her fellow seniors, sporting a goth look and a morbid collection of interests. A “walking encyclopedia of all things horror,” she’s compared to The Craft‘s Fairuza Balk.

* And then there’s Dion’s step-brother Jamal. Despite hanging out with a rough crowd, he’s got a big heart and an undying loyalty to Dion.

The show seems to be steering away from the female-centric storyline too, with Dion appearing to be the new protagonist. It’s great to see MTV changing things up, because honestly, we’d seen enough from the first two seasons’ characters. They were great, but how much more killing can they survive?

Brett Matthews, who is mostly known for his work on The Vampire Diaries and Supernatural, is now the new showrunner and the show has been taken under Queen Latifah’s Flavour Unit Entertainment banner. She will also act as an executive producer.

Keep your eyes peeled for a release date.