With AT&T Audience Network bringing Stephen King’s 2014 novel Mr. Mercedes to the small screen this summer, the first official teaser has been released. In the brief clip, Brendan Gleeson (28 Days Later…, Gangs of New York) gets paranoid as he inspects a gift sent to him by a serial killer.

Gleeson stars as Detective Hodges, a retired cop who is taunted by a series of obscene and lurid letters and emails from deranged murderer Brady Hartsfield (Penny Dreadful’s Harry Treadaway). Taking matters into his own hands, Hodges embarks on a lone, potentially felonious crusade to bring the psycho to justice before he can strike again. 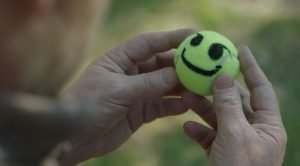