Movie Studio Bali is set to produce Dead Squad, a campy, splattery horror adventure that sounds like a dream. The film promises to harken back to the ‘80s in classic throwback style as it follows a group of people lost in the jungle. The jungle is home to monsters, so in action-horror fashion, the group are faced with a deadly fight for survival. 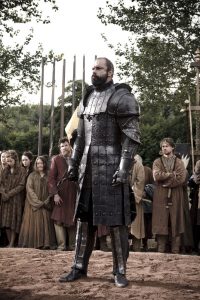 Dead Squad stars Game of Thrones and The Hobbit’s Conan Stevens – he plays The Mountain and the Orc King, so it will be no surprise to learn that he’s to play the leader of the mysterious monsters. You can check out two images from the film below, which show Stevens looking seriously badass.

Dead Squad will mark the directorial debut of Dominik Hauser and is set to begin filming in Indonesia in February. The film’s producer Christopher Hatton (Battle of the Damned) had this to say about the film:
“The film will to be a lot of messy, bloody fun. Dominik has a twisted vision and the creature effects being built by Movie Studio Bali are bringing it to life. Camp horror fans will eat this one up.”

It all sounds pretty great on paper, so we’re excited to see more from Dead Squad.