Director J. A. Bayona (The Orphanage, A Monster Calls) has released the first image from his upcoming sequel to Jurassic World. It’s a great and unusual image that shows an unidentified girl gazing upon a set of dinosaur skeletons in a museum. The inability to see her face and the overwhelming use of shadows creates a dramatic and eerie atmosphere in the image. We think it’s a great tease for the film and look forward to discovering how it reflects Bayona’s vision. 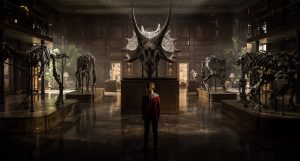 There is no word on the story the sequel will follow, but hopefully now that imagery is being released we should get wind of the plot soon. With the 2015 feature grossing over $1.6m at the box office, the sequel has massive shoes to fill and we’re confident in Bayona’s ability to craft a monstrous and exciting follow-up.