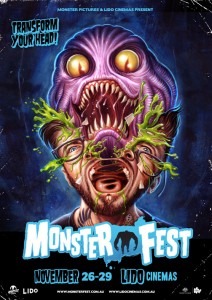 The cult and horror film festival Monster Fest has announced its first wave of programming during its 26th-29th November run in Melbourne, Australia. They also have some impressive guests that include Dee Wallace who will be hosting a screening of The Howling. The full details can be read below:

Opening Night Gala: Scare Campaign Premier and Party- Thursday 26th November
The Australian Premiere of the brilliant new Aussie horror flick – SCARE CAMPAIGN, the latest creation from the twisted minds that brought us 100 BLOODY ACRES, Colin & Cameron Cairnes. Starring horror legends Cassandra Magrath (WOLF CREEK) and John Brumpton (THE LOVED ONES, STORM WARNING & CRAWLSPACE), as well as rising star Olivia DeJonge (M. Night Shyamalan’s THE VISIT) the eagerly awaited SCARE CAMPAIGN is destined to become an Australian horror classic. Cast and crew will be in attendance for this screening along with a host of international and local horror stars and special guests.

International Special Guests
Monster Fest has a reputation for outstanding international guests and this year we’ve got someone amazing for each day of the fest!

Dee Wallace (THE HOWLING, CUJO, THE HILLS HAVE EYES, E.T.)
Dee is Horror Royalty and with our presenting partner Cinemaniacs, will be hosting a screening of THE HOWLING, as well as a ‘Clip and Tell’ retrospective of her magnificent career in horror. There’ll be a Saturday night, all-night marathon of her greatest horror gems, as well as a Sunday afternoon Acting Masterclass in partnership with Swinburne University.

Fred Williamson (BLACK CAESAR, HAMMER, FROM DUSK TIL DAWN)
The King of Blaxploitation will present the World Premiere of his latest film ATOMIC EDEN as well as a Friday night, all-night marathon of his finest cinematic offerings.

Butch Patrick (THE MUNSTERS, SCARY MOVIE)
The man who gifted the world with arguably it’s cutest horror character EDDIE MUNSTER, will present a ‘I Was a Pre-Teen Werewolf’ a ‘Clip and Tell’ retrospective journey through the iconic The Munsters TV show, as well as ‘Munsterpalooza’, an all day horror hot rod and Psychobilly Extravaganza – mind blowing films, pulsating bands, throbbing chrome, burning rubber and more!

Kooks and Spooks: Full Moon Trivia Extravaganza – Saturday 28th November
Join our hostess, Melbourne’s very own Queen of the Crypt Cherry Bites, house band The Tarantino’s, as well as Special Guests Butch Patrick, Dee Wallace and Fred Williamson (and more) for an unforgettable night of horror inspired trivia to curdle the blood and warp the mind! This event will see audience member’s team up with our horror superstars to battle it out for horror quiz supremacy and a host of prizes and accolades!

Munstapalooza
Join Butch ‘Eddie Munster’ Patrick and Melbourne pin up sensation Holly Wouldn’t, for an afternoon of Psychobilly and dirty rock excesses on the Lido rooftop – those savvy to the three B’s of rooftop depravity, BBQ, Bands and Beer, won’t want to miss this event – limited spaces available so get in quick!

If we were anywhere near Australia in November, then we’d definitely be at Monster Fest in an instant. This is just a taste of what’s to come and there will be over 40 feature films screened over the 4 days. Keep an eye out for more announcements and check out the mind-boggling poster below, too.