Monster Boar Poster is a Squeal 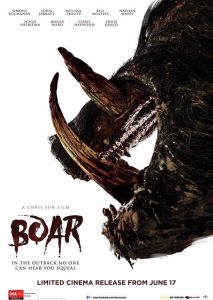 It has felt like a long old wait for Chris Sun’s Boar, which premiered at the Brussels International Fantastic Film Festival in April. While UK and US audiences will just have to remain patient for a while longer, the Aussie creature feature hits cinemas in its home country on June 17th, as announced by this tasty new poster.

While comparisons to Ozploitation classic Razorback seem inevitable, Boar features a far bigger boar and promises a lot more splatter, as teased in the trailer we saw back in March. Rest assured, as soon as we hear of worldwide release dates, we’ll let you know.