A Moment of Silence for Spooky A Quiet Place Trailer 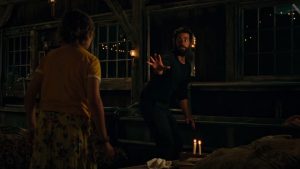 We learned back in March that The (American) Office star John Krasinski and Golden Globe winner Emily Blunt were to co-star in Paramount’s supernatural chiller A Quiet Place and, with production close to completion we now have our first trailer. It’s pretty creepy, and hugely intriguing.

Krasinski also directed the film for Paramount/Platinum Dunes, marking his third feature as director. It is also the first time he and wife Blunt have starred onscreen together. Co-starring in the film are young actors Noah Jupe, Millicent Simmonds and Cade Woodward. Michael Bay produced along with his Platinum Dunes partners, Andrew Form and Brad Fuller. Krasinski and Allyson Seeger executive produced alongside Scott Beck and Bryan Woods, who penned the spec script, which was then rewritten by Krasinski.

Plot details are being kept under wraps for the time being, with this trailer giving us our only real insight into what we can expect from the film. Why do this family keep so quiet? All will be revealed when A Quiet Place hits cinemas on April 6th, 2018.