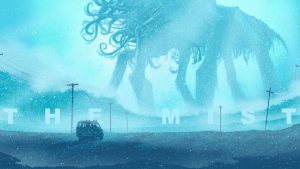 It’s been a while since we heard anything new regarding Spike TV’s upcoming TV adaptation of Stephen King’s The Mist. Talking at the Television Critics Association’s 2017 Winter Press Tour on Friday however, executive producer Christian Torpe gave some updates on the project. Comparing their approach to that of Fargo’s TV outing, he explained that the series will be less a straight adap or remake of Frank Darabont’s 2007 film than a reimagined take on the original story.

“Internally, we talk about it as doing the ‘Fargo’ approach, where the movie and the TV show is the same, but it’s different,” Torpe told the amassed press. “It’s like a weird, twisted cousin to the original source material. Fans of the movie and of the book and of Mr. King’s work will certainly see elements from it…We also, in order to develop it for TV and turn it into an ongoing series, took our own little detours here and there.”

As told in the press materials, “The Mist tells the story of a foreboding mist that arrives in one small town, ushering in a terrifying new reality for its residents, putting their humanity to the test. What will people do to survive when blinded by fear? The cast includes Morgan Spector, Frances Conroy, Alyssa Sutherland, Gus Birney, Dan Butler, Luke Cosgrove, Danica Curcic, Okezie Morro, Darren Pettie, Russell Posner, and Isiah Whitlock, Jr.”

Rather than the enclosed space of the supermarket where the bulk of the action takes place in Darabont’s film, Spike’s The Mist will follow a number of scattered groups of people struggling to survive. Morgan Spector plays Kevin Copeland, who is cut off from his wife Eve (Alyssa Sutherland), who is trapped in a mall with their daughter and the man who raped her; Okezie Morro plays amnesia-sufferer Jonah who struggles to find allies; and Frances Conroy plays Natalie, whose theories about the origin of the mist lead to conflict with her small community of survivors.

When asked if the show will feature an ending as famously bleak as that of the film, Torpe did hint that it will likely be closer to Darabont’s version than that of King’s novella, which offers a sense of hope by the end. “I personally love…[Darabont’s] ending,I thought it was a stroke of genius. We are playing around in that territory, and we also know, of course, Mr. King’s ending. And I know Mr. King actually preferred Darabont’s ending. And so I think we came up with our own spin on a very original and surprising ending.”

The Mist will premiere on Spike TV on June 22nd at 10pm.