Music journalist Phil Sturgess is back in the follow up to the fantastic Minstrel’s Bargain. It has been ten years since the events of the first book. Our protagonist, Phil, is older and has a family. He now owns the metal magazine he used to write for. Not all is well though. The magazine is struggling, as is his relationship. Unfortunately his ordeal is not yet over. His memories of his previous battle with the demon known as Minstrel have been blocked, but are slowly returning, and so is his enemy.

The rock musician possessed by the Minstrel is becoming a phenomenon. The band is touring Europe and blowing up. The music is amazing and infectious. It is this music that is the tool of the demon, and that gets into the heads of those who listen to it. They are his pawns that can be driven to horrific violence. The random scenarios of these violent episodes are some of my favourite aspects of the book. They provide great tension and graphic set pieces. The random nature makes them scary and without warning. In particular, there is one involving a train and another at a school that stood out as some of the shocking best. There are so many though! The gore and violence is enough to satisfy any gore hound. 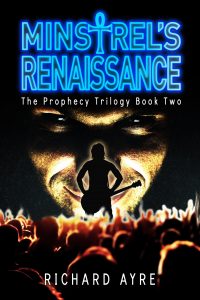 The character of hero, Phil, is so likeable. He’s fallible, out of his depth, an Everyman thrown into the deep end. You can’t help but emphasise with him. There is a prophecy unfolding – Phil against the Minstrel with the odds stacked against Phil.

Like any good sequel, the stakes are raised as is the body count. Phil has a family to worry about, as well as the fate of the world. The Minstrel has his own new agenda and an unquenchable thirst for revenge.  You don’t have to have read the first book, but I recommend it. Not only is it great, but you’ll also miss some references. This series is epic and I can’t recommend it highly enough. The author, Richard Ayre, creates a believable sense of grand scale to the battle.  Come and listen to the Minstrel’s song.