Surely one of the most ambitious of the recent wave of Stephen King adaptations is Netflix’s upcoming feature Gerald’s Game, which is directed by horror hot property Mike Flanagan (Oculus, Ouija: Origin of Evil). Its announcement last year got King fans wondering how on Earth a film would play out, since the bulk of the 1992 novel is told through the internalised thoughts of its main character, Jessie. Talking recently to Daily Dead, producer Trevor Macy has given some clues to Flanagan’s approach to the material, assuring fans that we can expect a “…faithful adaptation“ of the book. He also confirms that King himself has given his approval, no doubt sparking much relief on the part of the filmmakers.

“Well, I’m a big fan of the book…,” Macy said, “and one of the more fulfilling moments in my professional life was showing this cut to Stephen King and having him tweet how excited he was about it. I think the challenge with that—if you’re a fan of the book, so much of it takes place internally, in her [Jessie’s] head. So, ‘how do you do that in a cinematic way?’ was the fundamental question when you’re taking that particular book into movie land. It isn’t done quite the way it’s done in the book, but I’m very proud of it, and fortunately Stephen King’s very proud of it, so I think audiences are going to like it.“

Explaining further, Macy said that “There’s a storytelling device that we use that the book doesn’t. It’s really nice to get Stephen King’s support in doing that, even at the script stage, so he feels and we feel that it’s a very faithful adaptation.”

In King’s story, Jessie and her husband Gerald head off to a summer home for a romantic retreat where she reluctantly agrees to Gerald’s sex games. With Jessie handcuffed to the bed, Gerald crosses a line and is accidentally killed when Jessie lashes out. Now alone and trapped, Jessie’s only company comes from a stray dog and her darkest memories and fears. As night comes, she is unsure whether it is her imagination or if she has another companion: someone watching her from the corner of her dark bedroom. 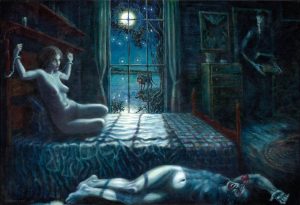 Netflix are yet to reveal a release date for the film, although it will be sometime later this year.