Plans to remake 1990’s cult psychological horror classic Jacob’s Ladder have been revived over at LD Entertainment, where producers Mickey Liddell and Jennifer Monroe have just procured the service of Midnight Meat Train scribe Jeff Buhler to revamp an existing screenplay penned by Jake Wade Wall (best known by genre fans as the writer of 2006’s When a Stranger Calls).

THR broke the news, although there’s no word on a director, cast, or target release date. Still, we’ll be keeping our ears to the ground in order to bring you additional details as news emerges. Stay tuned! In the meantime, take a stroll down Memory Lane by revisiting the trailer and synopsis for 1990’s Jacob’s Ladder below. 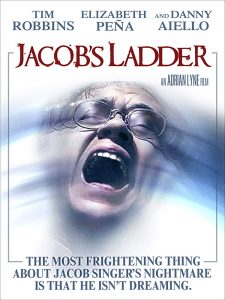 After returning home from the Vietnam War, veteran Jacob Singer (Tim Robbins) struggles to maintain his sanity. Plagued by hallucinations and flashbacks, Singer rapidly falls apart as the world and people around him morph and twist into disturbing images. His girlfriend, Jezzie (Elizabeth Peña), and ex-wife, Sarah (Patricia Kalember), try to help, but to little avail. Even Singer’s chiropractor friend, Louis (Danny Aiello), fails to reach him as he descends into madness.

Jacob’s Ladder was directed by Adrian Lyne from a script by Bruce Joel Rubin. According to IMDB, “Lyne turned down directorial duties on The Bonfire of the Vanities so he could direct Jacob’s Ladder. His first choice for the role of Jacob Singer was Tom Hanks, but, by coincidence, Hanks turned down the film so he could make The Bonfire of the Vanities.”

Another interesting factoid: All of the subway ads in Jacob’s Ladder are anti-drug PSAs. Don’t smoke the dope, kids!