Surprising, when you analyse it, how many successful Hollywood names made their final appearances in forgotten horror films: Fred Astaire starred in 1981’s disturbing Ghost Story, whilst Oscar winner Jack Albertson featured in schlock masterpiece Dead & Buried the same year.  Another star was the popular, blue mouthed American comedian Jackie Vernon, who’s last screen outing was in the oft criticised 1981 black comedy, Microwave Massacre: derided at the time, it’s not difficult to see why the film is now considered a cult classic. 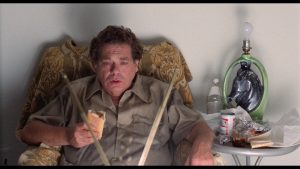 Driven to distraction by his wife’s incessant nagging and terrible cooking, Donald (Vernon), a construction worker, murders her in a fit of rage.  Only after inadvertently eating some of her remains, does he discover a new meat which makes him the ‘man of the hour’ with his workmates.  But where is he going to find a continuous supply of this tantalising dish to keep his – and their – cravings at bay?

You’re unlikely to have seen anything like Microwave Massacre before.  Everything from the ham performances – the stilted, over-the-top portrayal of Donald’s wife May, by actress Claire Ginsberg, is particularly bad – to the rubbery severed body parts, which wouldn’t frighten a child, let alone a restricted adult audience, are perfect examples of the ‘it’s so bad, it’s good’ school of filmmaking.  So much so that – apart from one cringe inducing scene where Donald tucks into a nice joint of tender arm, before realising what it is – you can’t help smiling at the gross theme and risqué humour of writers Thomas Singer and Craig Muckler’s over-the-top story.

At one hour, sixteen minutes, Microwave Massacre is surprisingly short.  This limited running time though, plays in its favour as the action never gets the chance to drag: no sooner has Donald cooked and shared his latest culinary delight with his unsuspecting friends, than he’s off to bed down and serve up the next bimbo unfortunate enough to cross his path.  Which is where the film’s other main preoccupation – sex – comes into play.  Panning out like a horror tinged entry in the popular ‘Confessions’ series of 1970’s British sex comedies, here Donald’s most diabolical deeds result from him getting his jollies off with a constant stream of well endowed nymphos. 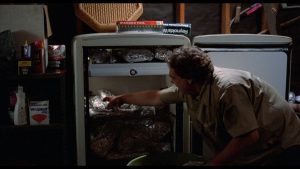 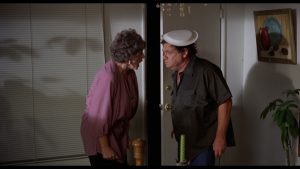 Made in 1983, at a time when microwaves were in their infancy, their potential health hazards still largely undiscovered, the film instead focuses on the speed and versatility of the machine.  Here the said kitchen device is on a huge scale, big enough to cook several limbs at a time.  Its proportions however, merely emphasise the comic aspects of the film – elements which save it from becoming just another exercise in horrific bad taste, from an era which produced more than its fair share of such delicacies. 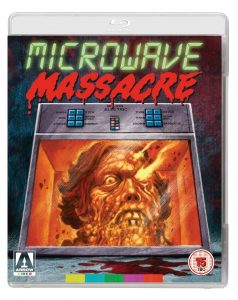 Extras:
Disappointingly, for an Arrow Video release, the extras with Microwave Massacre are somewhat limited.  Apart from their regular additions such as collector’s booklet, reversible sleeve art, and audio commentary by writer / producer Craig Muckler (moderated by Mike Tristano), the highlight here is undoubtedly the featurette, ‘My Microwave Massacre Memoirs’.  The mini making-of documentary – with input from writer Craig Muckler, director Wayne Berwick and cast member Loren Schein – brings added colour to a film which provides a fun, if cheesy, viewing experience when watched in the light of what these men have to say.